In this article, I want to answer the question “What are the different types of saunas and their uses.

The word sauna comes from Finland and translated literally means “bathhouse”. It is the only Finnish word used in the English speaking language. 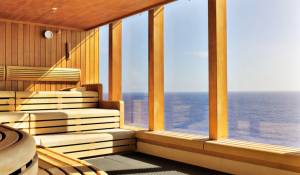 Saunas come in all shapes and sizes, as well as with different heating systems. If you are interested in improving your overall health and wellness any type of sauna would be a great asset in your healthy living plan.

While a sauna is great for your body, it can also be good for your mind. They are relaxing, rejuvenating, and have an extensive list of health benefits.

People have used saunas for thousands of years all over the world. They have used them for many reasons – cultural, and even religious reasons.

The sauna can rid your body of toxins that you accumulate on a day to day basis. It can improve circulation, decrease blood pressure, relieve aches and pains, and reduce your levels of stress helping to relax you. This in turn can help you sleep better and we all know how great we feel after getting a good nights sleep!

There are many different types of saunas on the market today and choosing the one that is right for you can be a daunting task. But rest assured which ever you choose the benefits to your overall health and wellness will vastly improve.

The Saunas Of Old – The First Real Sauna 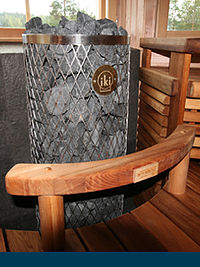 Finland is credited with some of the earliest known saunas. The oldest known saunas in Finland were made from pits dug in the ground, and primarily used as a dwelling in winter. The sauna featured a fireplace where stones were heated to a very high temperature. Water was thrown on the hot stones to create steam, this would create such high heat that the people would remove their clothes.

As times changed so did the sauna. The fireplace was replaced by wood burning metal stoves that had a chimney to allow the smoke to escape. When the Finns migrated to other areas, they brought their sauna designs and customs with them.

All this led to the further evolution of the sauna, including the electric sauna stove that was introduced in 1938. This provided the means to control the heat to a more accurate level. It also provided the user the convenience to pre-heat the sauna without building a fire.

The electric sauna stove was the beginning of the indoor sauna room popularity, you could now have a sauna without a chimney or a fire. The sauna evolved again with the introduction of the far infrared saunas that have quickly gained popularity in the last decade.

While the methods of heating the different types of saunas have changed, the sauna benefits remain the same. The sauna is the only place where both high heat and low humidity are used. The water added to the sauna creates the humidity this is referred to as a wet sauna.

Without water it is known as a dry sauna. The construction is the same for both, the only difference being a personal preference.

The Home Sauna – A Personal Treat 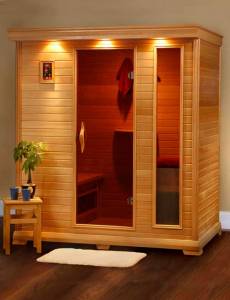 Are you considering building an in home sauna? Since saunas have become so popular for their health benefits, building one into your home can not only benefit you and your health but also add value to your home should you decide to sell.

Now, if you are not the handy sort you could hire a contractor with plenty of experience. While this may cost a little more you can rest assured the job will be done properly and in a timely manner.

Saunas are made to make you sweat. That means a lot of moisture and humidity that needs to go somewhere. That’s why a tight seal and ventilation is crucial between your sauna and your home.

The most popular heat source today for in home saunas are electrical. There are also wood, gas and infrared. Keep in mind if you go with gas it needs proper ventilation and a carbon monoxide detector. If you go with wood you will need a chimney. And if you choose infrared it can only be a dry sauna.

The Smoke Sauna – One Of The Original Types Of Saunas 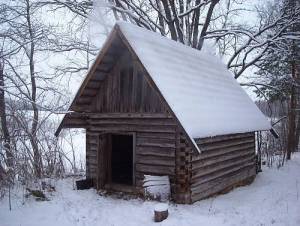 Smoke saunas are one of the oldest sauna forms and the customs and uses that surround them are found in many countries around the world. Some are dated as far back as the 13th century and become quite prolific by the 17th century.

The oldest saunas were cave saunas and were built partially or entirely into the ground and had ceilings mostly of soil.

Historically, most smoke saunas have been situated in Estonia and the area around that country. These saunas comprised of small one roomed, cross timber buildings which were built on corner stones. They had an earth floor, and were heated with a cobble stone stove using no cement.

By the 19th century changes had been made – saunas were being built in two parts with separate vestibules and a sweat room, and plank flooring. The roof was also changed. They were now covered in shavings instead of reeds and a hole in the roof was made to allow for smoke to escape.

The design of the stoves changed and were built with clay and burned bricks. Building the stoves with closed tops gave the opportunity for the smoke to be directed to the chimney and thus through the roof, now the saunas became smoke free.

Then the building of types of saunas with chimneys began to spread and in some areas it became the most popular design. Before long saunas with a chimney exceeded the number of those without one.

Some older users of the smoke sauna felt the ones with chimneys were not as good as those without. They pointed out differences like the floor being cooler, the sauna does not get as warm and when making steam the room becomes damp. In some areas they consider the smoke sauna to be the “right” sauna. 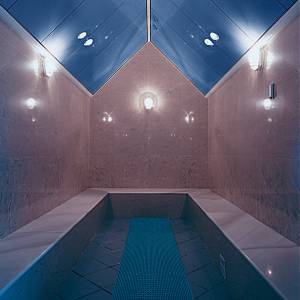 The origins of the steam sauna come from the Roman “steam baths” which began at the height of the Roman Empire. The Roman baths served many community and social functions.

Everyone in ancient Rome used public baths regardless of their social standings, the baths were supplied by natural hot springs from beneath the ground.

The Romans spread their love of bathhouses throughout the Empire and most Roman towns had a least one public bathhouse. They were also an important building in the garrisons.

The caldarium was built right on top of the furnace or ‘hypocaust’ and the walls were hollow to allow the the hot air coming from below to heat the bath.

Sweat bathing has been popular in many cultures through out the world. The Finns have laid claim to the sweat bathing as their personal method of hygiene.

Native Americans also liked the idea and built sweat lodges that were being used around this time. They believed they not only cleansed the body but also the mind.

The modern steam sauna uses a lower temperature and higher humidity and produces moist heat. They are built using tile or plastic and are heated by a device called a steam generator. The generator boils water into steam and the steam is released into the air.

Unlike a sauna, a steam room needs to be airtight so the humidity can build. The high humidity in a steam room will keep your sweat from evaporating, making you feel much hotter, and the more you sweat the more health benefits you will receive.

Portable Saunas – The Newest Of Them All 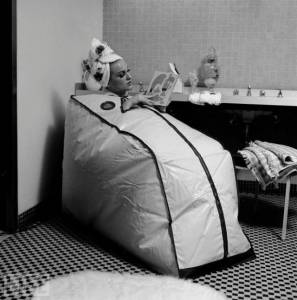 Saunas are used all over the world, and there are many different types. One type that has become popular to use at home is the portable sauna (read our Definitive Guide to the top models here). While its popularity has soared the health benefits have remained the same.

Imagine you can have your own personal sauna in your very own home or apartment! In fact you can keep it anywhere you choose, you can use it whenever you like and how often you wish.

The portable sauna has been around since about 1962. The first example, a Finnish one, was included in Life magazine’s round up of 30 “dumb” inventions.

But they did not go out of style. In fact the Finnish Olympic team reportedly takes portable saunas with them when they leave the country!

You don’t need to be an athlete to enjoy a sauna on the go. They are not only lightweight, but they are easy to assemble (most do not require the use of tools) and fold up very easily for storage or travel.

Some added benefits of a portable home sauna are the fact you can use it as often as you wish and you don’t need to leave your home. Also it’s more cost efficient than building one into your home and if you wish you can easily fold it up and take it with you on a vacation.

Imagine the pleasure of owning your own. You can relax, detoxify, and rejuvenate whenever you so desire. 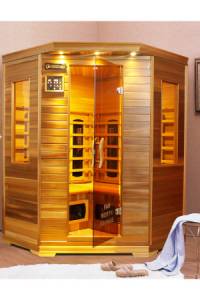 By far the most popular selling portable saunas on the market today is the far infrared portable sauna. The reason these types of saunas have become so popular is in part due to their portability. Health benefits and price also play a role.

The infrared saunas use heat and light to help relax and detoxify the body. These saunas omit infrared light waves that create heat in the body, causing you to sweat and release stored toxins.

You can get them in portable models, as well as sauna blankets like these ones we reviewed here.

Infrared heaters warm the body in much the same way as natural sunlight. Infrared heat therapy uses the wavelength of the visible and non-visible light spectrum of sunlight to heat the body normally.

This makes the infrared portable saunas different than traditional saunas that raise the temperature of the air around you to very high level within the chamber to warm the body.

Infrared rays are one of the suns rays and are the healthiest. They penetrate into your skin deeply and they dissolve harmful substances accumulated in your body. The infrared rays vitalize your cells and metabolism.

The sweat glands offer one of only a few mechanisms that the body has to release toxins, and since the skin is the largest organ in the human body, it’s a very good means for elimination.

Today many healthcare professionals use Far infrared heaters to treat a variety of diseases throughout the world. It is believed that Far infrared waves help improve blood circulation and recovery from fatigue.

There is no doubt the Far infrared sauna is your best choice. Their incredible ability to improve your health and your overall lifestyle is nothing short of amazing.

So, What Is The Best Type Of Sauna?

While all the types of saunas on the market today offer the same great health benefits, they certainly differ in other aspects.

Size is one difference. Home saunas can be built into an extra room, or built outdoors and accommodate more than one person. While portable saunas take up very little space and usually accommodate only one person.

Steam, Smoke or Infrared? The choice is yours. Many people still prefer the traditional steam sauna and there are some excellent ones available on the market today.

The sauna that has worked it’s way into millions of households over the last few years is the Far Infrared Sauna. These saunas are well priced, portable, easy to assemble and use very little energy.

So if you are considering purchasing a sauna for health reasons, rest assured which ever sauna you prefer the health benefits are the same. So all you need to do is choose the type of sauna that’s right for you.